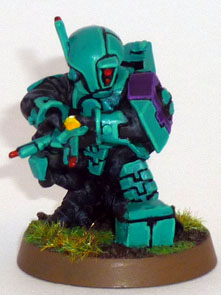 When you get wounded on the battlefield, especially one as brutal as the 40k battlefield, you'd like to think that your side cares enough about you that they'll try to treat your wounds, and possibly even save your life.  The Space Marines have their Apothecaries, whose primary duty is to care for the chapter's geneseed, but also to treat injured Space Marines so they can fight again.  The Imperial Guard, in an attempt to maintain some humanity in the uncaring grinding death machine of the Imperium, have medics to treat their injured guardsmen.  Even orks, after a fashion, have their medics, known as painboyz.  Their treatments might be more dubious, but orks medics exist nonetheless.

But what about the other races?  There's no mention of medical personnel.  Now I wouldn't expect a race like the Necrons to have medics...  And being treated by a medic in the forces of Chaos or Dark Eldar might be considered a fate worse than death.  But there are two other races, for example Eldar and Tau, that you might expect care enough about their own troops to try to salvage them from lingering death on the battlefield.

So here's my Tau Medic.  Keeping my Fire Warriors alive to fight another day.
4 comments: 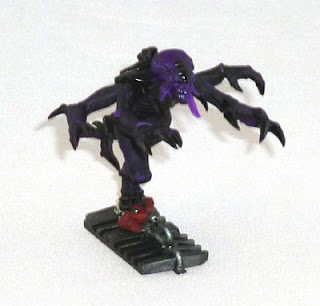 Finished my first attempt at a Space Hulk Genestealer.  I don't think the above photo really does it justice.  I put gloss varnish on the claws, armor plates, and tongue, but it doesn't show up in the picture.  The highlights are a little more vivid as well on what is mainly a very dark model, but those are hard to see as well.

Anyway, the color scheme is a reversal of my 40k genestealers.  I wanted something even darker and more sinister looking. 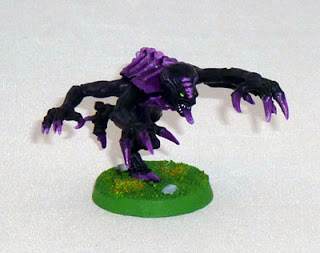 In any even, I'm so behind in painting miniatures that anything at all that I complete is a step in the right direction, hence this post.
No comments:

The past month or so has not been so friendly to me with regards to either blogging or playing 40k (or anything miniature related).

Fun-wise, I've done paintball twice in the past month: 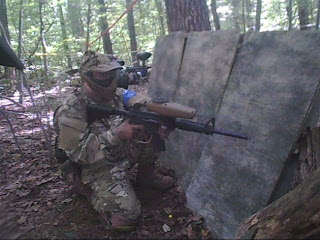 You might think that a significant portion of my time would be taken up by playing this... 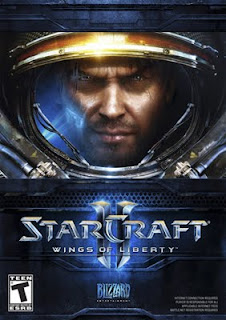 For the most part I've been busy with the backlog of chores and other jobs around the house that have piled up. Every time I think I'll get back into painting something, another distraction comes along. I still have hope though that in the near future I'll be able to find some time to do some painting.

One of my big chores is to reorganize all my storage--since my daughter has been born, baby stuff has been displacing everything else in the house, and the clutter has been piling up in a rather disorganized, space-inefficient manner. So I've had to move lots of crap around, while throwing away lots of stuff that I no longer need. In the midst of this I had to make a heartbreaking decision. My garage has long been the home of lots of my 40k scenery, including a bunch of cityfight terrain, featured in multiple battle reports, for example:
Well, the cityfight terrain has been sitting on valuable shelf space for years now, and so I had to make the decision to destroy the city. I hadn't had the chance to use it in years, and when I examined it, it was covered with a thick layer of dust, cobwebs, and other detritus.  While I liked the terrain, it was just way too bulky and underused so I couldn't justify keeping it.  Someday, when I have more room, I'll have to rebuild my terrain collection, and I think my terrain building ability has improved somewhat, so I'll probably be able to do a better job. At least, that's what I keep telling myself.

I do have several blog articles that I've worked on sporadically, but none of them are finished yet. Chances are I'll be able to finish one or more of those and post those before I'm able to get back into painting.

So anyway...I'm posting this update to try to tell myself that there's a light at the end of the tunnel, and that soon I'll be able to get back into painting etc.
1 comment: