Unless you're one of those players who buys a new codex and army, plays it in tournaments, then sells everything on ebay as soon as the next codex/army comes out, you probably have multiple editions of GW rulebooks and codices on your shelf.  (If you're a person who plays mostly in hobby stores or in tournaments against strangers, then this post doesn't apply to you) 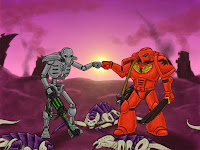 Any time a new codex comes out, the Interwebs explode with everyone hating on the new fluff.  Beloved history and background are retconned out of existence, warped beyond recognition, or generally trampled upon.  Authors (I'm talking about you, Mat Ward) with no concept of how their new vision of the 40k Universe RUINS EVERYTHING.  I hate it as much as everyone else. 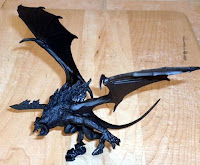 Primed. I'm considering painting the flames using the technique I've never tried before. This worries me a little bit, but nothing ventured, nothing gained.
1 comment: 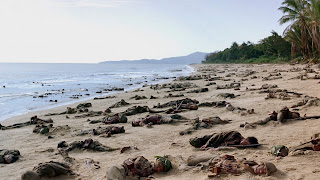 It's taken as a given that when you play a game of 40k, during a game you're going to lose a large portion of your army.  Maybe all of it if you lose.  Watching your opponent remove his models from the table is part of what makes the game fun!  The mental image you have of two armies of heroes (or evil bad guys) clashing in a desperate struggle in which only the few survive makes the game feel epic.  Gamers plan battle strategies around their suicide units.  They take it for granted that their elite unit will deep strike into the middle of the enemy lines, "pop a Land Raider", and then die.  I wonder how the troopers would feel if their commanders told them that it's his intention from the get-go that their purpose is to die.

Flames of War...is on FIRE!

Flames of War is taking over the gaming scene!  I predict that in five years, everyone will be playing Flames of War, and if in a gaming crowd you mention Games Workshop, you'll be met with a bunch of blank stares.

Email ThisBlogThis!Share to TwitterShare to FacebookShare to Pinterest
Labels: flames of war 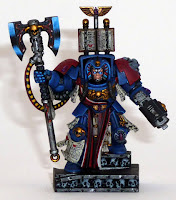 This guy was a pain in the butt.  I tried to paint him similar to the way he was painted in the rulebook.  Most of it wasn't too hard, but trying to get the force axe to look right was a trial.  With time I think I have gotten better at using layering as a technique, but blending/feathering continues to elude me.  I tried painting that axe over and over again, and it got to the point that I had to sand the layers of paint off the blade and start over...twice.  Clearly I need much more practice with it.  Perhaps I needed to try it first on a larger surface.  I'm still not entirely happy with it, but I'll have to chalk it up to experience...
No comments:

One Shot, One Kill 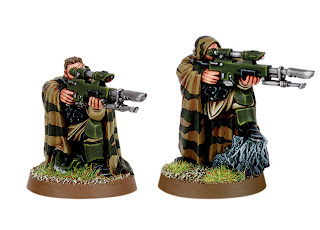 In the real world, snipers have repeatedly been called "the deadliest weapon on the battlefield." Snipers have the element of surprise, can kill at very long ranges, are hard to deal with, and thus instill terror in the enemy. (As an aside I will ignore their other, arguably more important, employment as battlefield observers) If snipers are so deadly in the real world, why are they so ineffective in the game of 40k?

Read more after the jump...
3 comments:

The Changing Face of the Guard

Here is an old IG picture, from White Dwarf 109, from 1989.  It shows a Necromundan regiment, marching into battle against the forces of chaos.  It's an image that has stuck with me for a long time--these guys are marching in ordered ranks, carrying their lasguns at right shoulder shift arms, in the midst of battle.  It is reminiscent of Napoleonic warfare, or perhaps the American Civil War.

Read more after the jump...
6 comments: 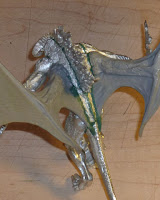 Did the assembly and some gap filling.