Over on that great 40k blog, Bell of Lost Souls, Brass Scorpion recently put up an excellent editorial piece: "A Funny Thing Happened On The Way To The Forum". I won't reproduce it here (click on the link above, it's worth the read), but the gist was that on gaming forums, there seems to be two basic populations. Population 1 consists of gamers/hobbyists who post to forums to "support" the hobby, they discuss rules, playing the game, painting their miniatures. They even criticize all aspects of the hobby (including GW itself), but they do so constructively and with decorum. Population 2 consists of gamers/hobbyists who post to forums, as he puts it, "to entertain themselves at the expense of others." They criticize (non-constructively), flame, and appear to have a chip on their shoulders against GW.

Brass Scorpions advocates the position of the Population 1. Personally, I can't see why anyone would disagree with him on this.

I was surprised at the number of comments (186 at last count). Clearly this issue is important to people to have engendered such a vocal response. The responses start out positively, but then, to my dismay, I saw that it devolved into flaming (primarily a small minority). It is irony at its best--Brass Scorpion comes out against flaming, and then is flamed for it. He was called everything from a GW shill for saying he likes their products to a fascist for daring to advocate that we be polite to each other while discussing the hobby we all supposedly love. What is wrong with these people?

It is good to see so many blogs in the blogosphere where the attitude is more positive, the FTW Blogger Group being a good example of this. Blogs can so easily become nothing more than a vehicle for ranting (does this post constitute a rant?), so it is nice to see that a community exists where people talk about the hobby they enjoy in a positive way. I have nothing against constructive criticism, but I just don't see what purpose destructive criticism serves.

Anyway, I didn't read all of the flames--instead, I just skimmed over them (once I identified it as a flame, I moved on). Eventually I got up from the computer and did something more worth my time--I painted some miniatures.
2 comments:

Recently I've been playing some Battlefleet Gothic, and after getting a closer look of some of Badelaire's Necron Fleet, I realized that it wouldn't be too hard to scratch build Necron ships. The Necron ships are generally made from simple shapes: mainly crescents and geometrical shapes. Necrons are also light on ship classes (1 Battleship (BB), 1 Cruiser (CA), 1 Light Cruiser (CL), and 2 Escorts), so I thought it would be neat to create a new kind of ship.

The result is the Vulture Class Cruiser. It's made entirely out of various kinds of plasticard and plastic tubing. I started out with a basic shape of two intersecting crescents, and then just started piling on details. Then I filled in some open spaces with green stuff. I debated on how to mount it--either as a "+", or as an "x", and decided that the "x" looked meaner, so I went with that. In any event the ship has no real "top", as I imagine it spinning on its axis as it flies through space. I envision it as a sort of "assassin" ship--it waits patiently until an enemy vessel is distracted by other ships or escorts, then swoops in and opens up with a devastating barrage of its Gauss Particle Whip (lance) battery. Here is the result: 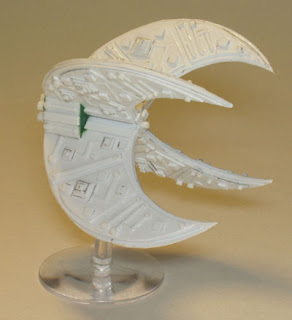 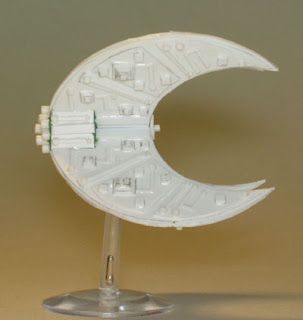 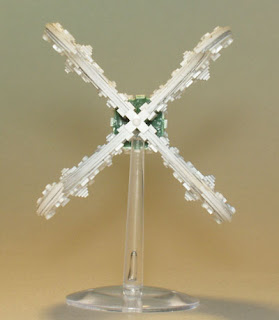 And the same views, painted in standard Necron boltgun metal: 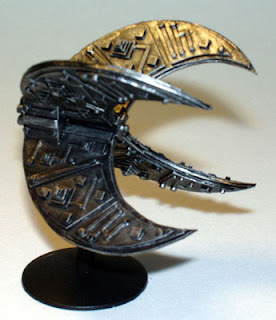 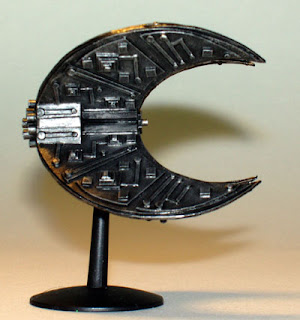 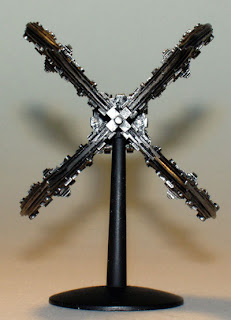 Over all, I'm pleased with the result--from a distance it fits in the rest of the Necron fleet very well. Here it is with some other Necron vessels: 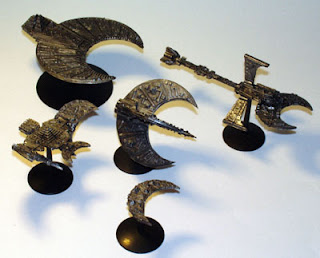 The Vulture first saw action in the battle report in my last post, and it did very well--taking out a Lunar Class Cruiser with a single blast of its Gauss Particle Whip.
No comments: 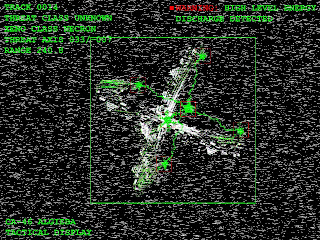 This battle is the third battle in a four battle mini-campaign between the Necrons and the Brazen Claw.

Located in a strategic central location that is also at the nexus of navigable passages through the warp, Axis Columen is known as the “keystone” of the Arcadia Sector. The planet itself remains uncolonized, however its orbit is widely trafficked by both the Imperial Navy and commercial shipping. Upon discovery of a unknown signal emanating from the planet, Imperial Navy scouts were sent to the planet’s surface to investigate, but contact with them was quickly lost. One of the scouts' last recorded transmissions indicated implacable, mechanical beings advancing on them.

Navy Commanders contacted the nearest Space Marine force in the area, a Strike Cruiser of the Brazen Claw. Recognizing the threat, the Brazen Claw responded quickly and decisively.

Battle Three: Stop the Necron Fleet (Battlefleet Gothic)
Now that contact has been initiated, the Brazen Claw and Necron forces are poised to do battle. The Brazen Claw must seize ground in order prepare for their final strike on the Necron Beacon.

This battle report is presented in a different format from my other battle reports--rather than post it in html format, I opted to make it in Word and then create a PDF. Doing so allows me to be a bit more creative with the format, but doing it was a pain! It also has some downsides, such as while you can zoom in on the PDF, you can't click on the maps to make them larger and easier to read. In any case, I'm not sure if doing it this way is a step forward or backward, so comments are welcome!