Book Review: The Children of Hurin

It has been several years since I last read The Lord of the Rings, and even longer since I last read The Silmarillion.  Returning to Middle-Earth was a better treat than I had at first expected.  The first time I had read The Silmarillion, in middle-school in the 1980s, I found it to be interesting, although tedious in places.  Two of the longest tales (and therefore the most tedious) were the tales Of Beren and Luthien and Of Turin Turambar.  I found that I just had to plow through them to "get on with the story" of the First Age. 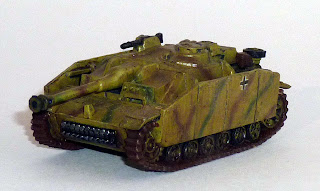 Here is my first German vehicle from the Flames of War Open Fire! boxed set, a Sturmgeschütz III.