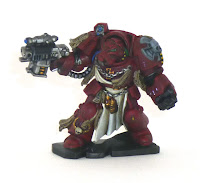 It took me more than a year to get back to painting my Space Hulk minis, but after painting Brother Noctis and a Genestealer, now I'm onto Brother Deino. The picture isn't so great, but things came out pretty well, I think, until...

Battle Report from the past...40k

Here's another battle report from the past, this one the first that I know of that is for Warhammer 40k.  There were a few other battle reports, mainly Warhammer, and at least one for Adeptus Mechanicus, but this one is 40k, pitting Andy Chambers' Blood Angels against Jervis Johnson's Alaitoc Eldar.  This battle report appeared in White Dwarf 141, from September 1991.  Just looking at the miniatures and how the game was played, I think it's very interesting to see what has changed and what has not. (Clicking on the pictures will make them large enough to read)

Battle Report from the Past...

While doing some digging around I came across this: the first Battle Report that I know of in White Dwarf magazine. At least, the first one in my collection, which goes back to issue #98. This one, titled "24 Hours at Carik Mound", which appeared in issue #107, recounts a 24 hour Warhammer 3rd Edition battle fought by a gaming club that included some GW staff members. Battle Reports become one of the most popular features in White Dwarf. (by issue 140 or so, they become a regular feature)

I've scanned the article in its entirety below. (Seeing as the article is some 23 years old, I'm hoping GW won't mind all that much).  As you can see, Battle Reports have come a long way in the intervening decades.  At the very least it's an interesting read to see how much things have changed since then.

I figured it was about time to do a shout out to a friend of mine: Jack Badelaire.

Jack and I have been gaming together for some 13 years now, when we met at Boston University. For a while we played tabletop RPGs in our gaming group, but I had been a 40k gamer long before I met him. It took some cajolery to convince him to give 40k a try, but the imagery of the Necrons got him hooked. Now he has a good-sized Necron army, a large Waaagh! of Orks, and has recently started a Space Wolves army. Over the years his forces have featured in many if not most of my battle reports.

Jack's blog, the Post-Modern Pulps Blog, deals with action/adventure novels, movies and television series--all things that have in part inspired the over-the-top action-packed adventure that is found in the Warhammer 40k universe.

Jack has made for himself a network of contacts in the blogosphere with other fans of the genre, and even several authors. With the help of several like-minded collaborators, he has published the first issue in a what promises to be an interesting eJournal called Hatchet Force Journal

Among other things it consists of several movie and book reviews, an interview with action/adventure novelist Mack Maloney

(author of the Wingman and The Pirate Hunters series), and the essay The Children of Vietnam by Jack himself.

The eJournal is $0.99--pocket change, really. So if you're into the action/adventure genre I encourage you to check it out.

The Journal isn't the only thing he's been working on. Jack's first novel, Commando: Operation Arrowhead, will be released as an eBook for the Kindle in the coming months: 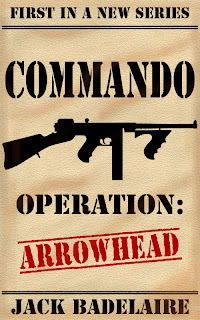 This ebook is the first in a planned series about British Commando operations during World War II. This first installment introduces us to Tommy Lynch, a veteran of the evacuation at Dunkirk, and his first mission as a Commando in Nazi-occupied France.

Jack's also hard at work on another novel, Killer Instincts, which is a revenge thriller set in 2001. It is currently in the editing phase and stands a good chance of being released by the end of the year.

Killer Instincts is about young William, a preppy college student whose family is wiped out by mafiosi. He is introduced by his Vietnam vet uncle to the shadowy Richard, an eccentric mercenary who brings William's killer instincts to the fore, preparing him to exact a very personal revenge.