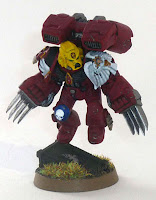 A while back (yipe, almost two years ago!) I made a post called Inspired by Art, where I showed a bunch of pictures of models that I had converted that was inspired by 40k artwork.

Gotta Do My Research...

Getting into a game like Flames of War is not for the faint hearted.  Not if you're as crazy as I am, that is...

Email ThisBlogThis!Share to TwitterShare to FacebookShare to Pinterest
Labels: afrikakorps, flames of war

Flames of War. I finally caved...

So I finally caved.  With 3rd Edition of Flames of War coming out, I decided it was time to join the fray.  I picked up the Flames of War 3rd Edition mini-rulebook and have started to dig in, and so far I like what I see.  It will probably be a while before I actually get to play a game, but when I do, look for the battle report here!

My adversary will undoubtedly be Badelaire, my usual opponent.  After some discussion of what theater and time period that interests us, we've settled on the North Africa campaign.  The mystique of Rommel the Desert Fox has always appealed to me, so I will be building a Afrikakorps force modeled after the 21st Panzer Division.  Badelaire will be taking command of the Brits, for as he said "their tanks were always outgunned by the Germans, so whenever you managed to kill a Panzer, you know you earned it."

I think we're in for some interesting games in our future!

Email ThisBlogThis!Share to TwitterShare to FacebookShare to Pinterest
Labels: flames of war

In the last post I talked a little bit about scale of 40k miniatures, and I used the calculated scale (1/57) to scratchbuild a rudimentary M1 Abrams tank.  But how does this hold up to the scale of the miniatures themselves?

Battle Report: The Lord of the Rings: The Long Night

A small band of men and their dwarf allies desperately defend a their village against rampaging orcs.  Will they hold out long enough for help to arrive, or will their children and womenfolk be left to the mercy of bloodthirsty orcs?