March 4, 2017
I did the BoldrDash WinterDash in 2016 by myself, and this year I decided to do the family race with my 8-year-old daughter.  In the day or so leading up to the event, I wasn't "feeling it," but in the end I'm glad I went because it went fine and my daughter and I had fun.

COMMAND: Northern Inferno Scenario 10: An Eye for an Eye

Despite early warning, the Soviet use of nuclear weapons against mainland UK RAF bases came as a rude shock. The Prime Minister, with consultation with his Defence Staff, have agreed to order a retaliatiory strike against the Kola Peninsula.

The use of Polaris SLBMs or Vulcan B.2 bombers for a nuclear strike has been ruled out as their employment could escalate the situation into full-scale nuclear war, and these precious assets need to be withheld as the ultimate bargaining chip.

The majority of RAF bases in Scotland have been wiped out in a second-wave strike conducted by Soviet SSGNs firing nuclear cruise missiles, and RAF's nuclear-capable Buccaneer strikers in the UK midlands do not have the necessary range to conduct a strike, as recent losses have severely limited tanker support.

This means that the Fleet Air Arm must undertake the mission. 809 Sqn Buccaneer S.2Ds based on HMS Ark Royal have been ordered to conduct nuclear strikes on the Kola Peninsula.

September 10, 2016
This was to be the second BoldrDash Kids and Family race that my family did, and it would be held at Rocky Point, Rhode Island, the site where an amusement park used to be. I had been there several times as a kid myself, my favorite being the Corkscrew, a roller coaster that lived up to its name.

There was no sign of the amusement park now; it was all covered in grass and all the of the rides and buildings were gone. Instead, there were lots of BoldrDash obstacles.

Introduction
For the past few weeks northern Norwegian airfields have been pummeled by Soviet forces, rendering them unsuitable for fixed-wing operations. Forward-deployed RAF units have now withdrawn to airbases in Scotland to bolster home defence.

So far the United Kingdom has not been directly attacked; but now intelligence has suggested that the UKADGE and northern airfields are next on the target list.

Recon flights and satellite imagery have detected multiple bomber regiments fueled and armed with supporting assets in the Kola Peninsula. These forces are expected to be the spearhead of an attack on the UK mainland.

Will the RAF be able to protect the Crown and country once more?

July 15, 2017
There was a lot of anticipation for this race. Word of its good reputation had spread from other parts of the country and so many people were looking forward to it coming to New England.

From looking into it ahead of time, it looked much like a Spartan Race, but without the Spartan elitism. Similar obstacles, but with some fun ones thrown in. Spartan Race seems to be all about brute strength, whereas Tough Mudder's shtick is more about teamwork and mental obstacles, and the vibe I got from Savage Race was somewhere in between.


Read more after the jump...
No comments: 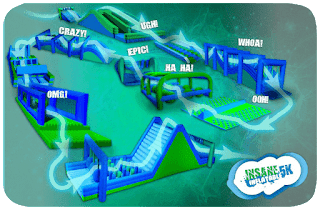 September 3, 2016
After the debacle that was the Samurai Sprint (not the race's fault, but rather my injuring my shoulders and not feeling good enough as a racer), I decided to focus a little more on "fun" races.

This race was the "Insane Inflatable 5k", a 5k race where the obstacles were all inflatable "bouncy house" type obstacles. I didn't think that my 5-year-old son would be up for the distance, and that coupled with the price made me decide to so only with my 7-year-old daughter. That turned out to be a good decision.

A NATO convoy is headed across the Atlantic to a safe haven in the English Channel. The convoy is absolutely vital--it must get through. The primary threat is from submarines, and undoubtedly there are a lot of them. In the first day of the mission, I lost the frigate USS Pharris early on to a cruise missile attack, but I repaid the favor by sinking several Soviet submarines.

Then, overnight, things got worse. An air-raid sank two ships of the convoy, and then as the sun rose over the convoy, things went from bad to much, much worse.  A larger air raid struck, sinking several more ships and the USS Lexington itself, the flagship of the convoy.

Yet there are still seven ships in the convoy left, and I still need to make a dash to safety. The problem is that there is still over 500nm to go to safety.

In Part One of this Scenario, a NATO convoy is headed across the Atlantic to a safe haven in the English Channel. The convoy is absolutely vital--it must get through. The primary threat is from submarines, and undoubtedly there are a lot of them.

In the first day of the mission, I lost the frigate USS Pharris early on to a cruise missile attack, but I repaid the favor by sinking four Soviet submarines. But there is a long way to go still, some 730 nautical miles.  The first day is over, now my convoy must make it through the night.

Introduction
The Soviet Union has warned NATO that any further reinforcement of Europe "will dramatically escalate the situation". The Red Banner Fleet deployed most of its submarines before the conflict erupted; as a result, the surviving ones are now well-placed to interdict NATO shipping in the Atlantic LOCs (Lines Of Communication).

With Iceland still in Soviet hands, even after strikes by the Oriskany CVBG, the airfields are still in operation after Soviet engineers repaired them.

The US 2nd Fleet with NFR (Naval Fleet Reserve) units has managed to assemble a motley collection of escorts together including the training carrier USS Lexington with an air group thrown together with reserve squadrons of S-2 Trackers and SH-3 Sea Kings.

The Royal Navy has spared 4 escorts from the Home Fleet to cover the Western Approaches. RAF will also be deploying Nimrod MPA as long-range ASW cover and Sea Kings from RNAS Culdrose when in range; STANAVFORCHAN and MCM 3 groups are also patrolling the South-Western Approaches and English Channel areas.

This convoy must get through, period. Nothing less will do. 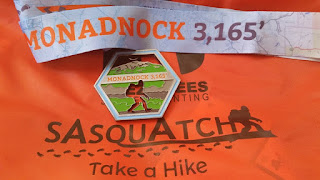 May 20, 2017
After the ignominious end to my OCR season last year, I was looking for "easier" events to go to this year. I took my daughter to the BoldDash Winterdash, but so far that was it.

Then I heard about Sasquatch Take a Hike. It's inaugural event would be a timed hike up Mount Monadnock in New Hampshire. Mount Monadnock is relatively close to home, and I had always wanted to climb it, so this "race" seemed like a good excuse to do it.