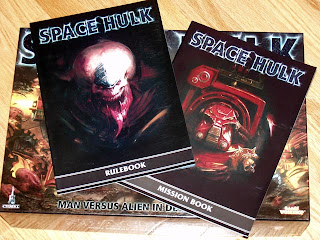 After owning Space Hulk for nearly a month now, I finally got to play it. I met up with Badelaire yesterday and played two games, both Mission I: Suicide Mission, first as the Genestealers, then we swapped sides and I played the marines.

In Game One Badelaire's marched down the corridor, killing stealers along the way, until on one turn Badelaire neglected to put a marine on overwatch, allowing one of my stealers to get close, killing that marine, and then the Heavy Flamer behind him, winning me the game. Both of us taking lessons learned from Game One, we replayed the mission with me as the marines. This time I advanced quickly down the corridors and had to change my plan midstream, as the genestealers were piling up awfully fast. Having lost one of my scouts, I resorted to firing the Heavy Flamer to clear a path, which proved decisive. Using it again I blocked off more genestealers, allowing me to make a made dash for the control room. Aided by a lucky draw from the Command Point pool, I was able to get to the room and flame it, winning me the game.

As for the game experience itself, I noticed that some of the genestealers were a pain to fit on the board next to other genestealers, mainly the ones standing on girders, i.e., the ones with the larger bases.

Finally, I want to add that while the map for Mission I seems very simple--all the marines have to do is walk down the hall and turn left--the simplicity gets lost very quickly as the genestealer start filling the hallways. It ends up being far more tense and exciting than the simple map would lead you to believe.
-Darkwing

And now for Badelaire's take on the games:
Playing two games, one as Terminators and one as Genestealers, I can definitely see the fun in even a short and simple mission. Being able to use the different special rules, such as Overwatch or Guard, as well as the "blip" rules and the different sorts of weapons, gives you a variety of options. Just like Chess or Checkers or a lot of other very well designed boardgames, I can see Space Hulk to be a game that takes an hour to learn, but far longer to master.
A few random thoughts come to mind.
All in all, I really enjoyed the game, despite being the loser in both. I'd definitely be up for more games, especially trying out options like Lightning Claws, Assault Cannons, and the other Terminator goodies.
2 comments:

Sobering thoughts about my own complacency

Since I put up my "Miniatures Queue" on the right hand bar of my blog, it's kept me very aware of the mountain on miniatures I own that I have yet to paint. As every gamer knows, once you start collecting, it's hard to stop and you quickly fall into the wargamer's trap--you always buy miniatures faster than you can paint them. Since I've been collecting miniatures for 22 years now, I've had plenty of time for the mountain to grow. Being out of college and having a real job with disposable income didn't help.

At this stage in my life I'm at the mercy of other competing forces, but the goal remains the same--conquer the mountain and paint up all the miniatures! This goal is probably ultimately unattainable, but having nearly 500 miniatures in the queue is ridiculous.

Supporting/raising a family means two things--I have less time to paint, but also less money to spend frivolously on more miniatures. So these two cancel each other out somewhat. Other good news is that I'm not all that interested in getting new armies that are in GW's immediate future, for example Space Wolves and Dark Eldar, so that leaves me some time to stay focused and work on the miniatures I already have.

But still the task is very daunting. I did some calculations, trying to be somewhat realistic. I took the miniatures in my queue, and tried to come up with an estimate on how long it would take to paint them all. Based on the various demands on my time, I estimated it would day me 2 days to paint an infantry model, 3 days to paint a mid-sized model like a cavalry model, crisis suit, or terminator, 1 week to paint a vehicle, monstrous creature or character model, and 2 weeks for uber-projects I have planned. This doesn't mean I'll be spending every waking hour on painting, but rather painting when I am able.

The results are sobering. Based on my calculations, I'll finish painting up all the miniatures currently in my queue on February 27, 2013. Yipe.

This outlook date will be subject to change as I complete and/or buy new miniatures. But I'm going to put an "Estimated Date of Completion" up on my miniatures queue section. This will hopefully serve two purposes--stop me spending money and get me painting more miniatures!
10 comments: 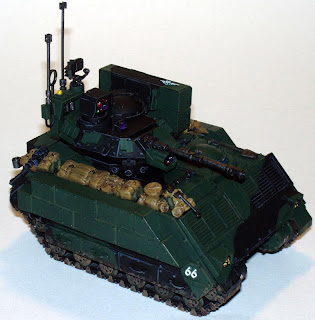 On the front, the spade is the brigade symbol, while the 1-5 denotes 1st Combined Arms Battalion, 5th Infantry Regiment. 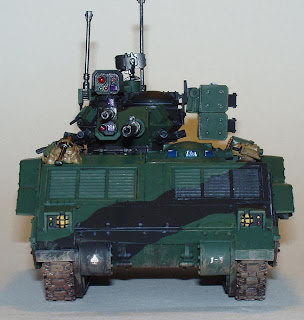 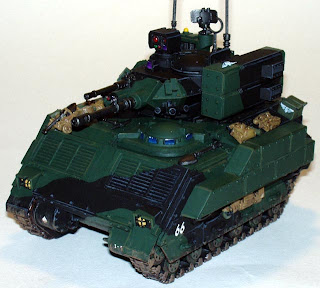 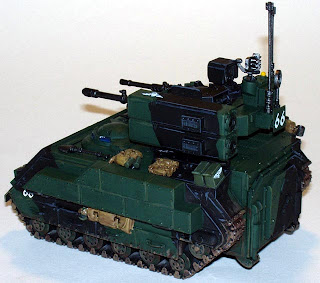 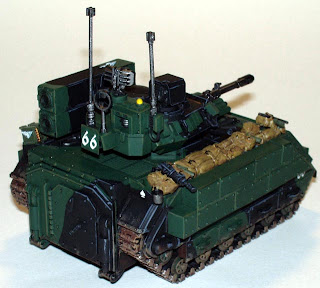 Some shots with the Missile Rack deployed: 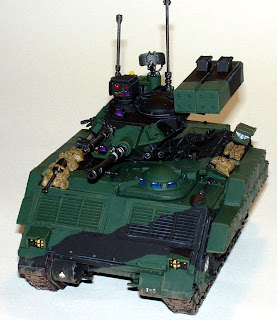 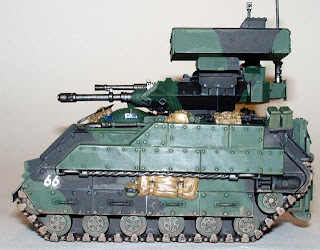 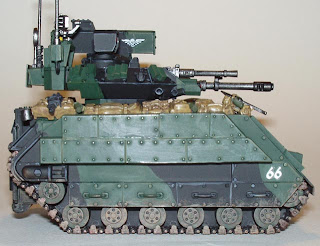 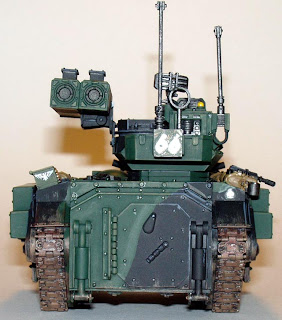 With the rear hatch down: 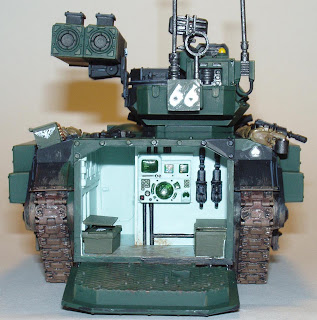 This picture has the driver's hatch open, exposing the driver. 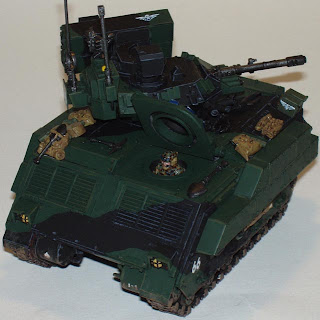 And finally here's the Battalion HQ section, deployed for battle. 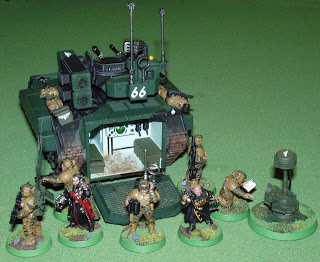 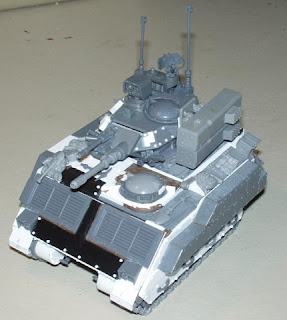 I was having problems with the turret (mainly the missile rack in locked position) banging into the top of the driver's hatch when I traversed it. Therefore I had to have driver's hatch hinge with a low footprint--and I finally figured it out--one pin coming out the side connecting it to the rest of the hull, and a small hinge sticking out the left side of the hatch. and I forgot to take a picture with the hatch open, but I'll rectify that later. 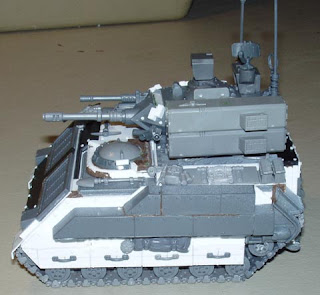 I had to do a bit of surgery on the missile rack, as despite my best efforts, in the locked position it was just too low, and banging into things all over the place when I traversed the turret. So I added a shim to raise it up a bit (you can see the white plasticard shim I at the attachment point of the mount to the turret). Now it clears the driver's hatch just fine. Aside from some very minor tweaking, I'm about ready to paint this up!
5 comments:

My copy of Space Hulk arrived last night (yes, I succumbed to temptation). I know that others have already seen their store's copy, or even been lucky enough to be tapped to paint up their store's minis, like Ron over at From the Warp, so most of this post probably isn't news to everyone. But I figured I'd post my first impressions of the box's contents anyway. 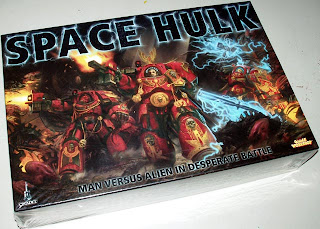 First thing's first. It's heavy. Just for kicks I had to weigh the thing (by standing on a scale and holding it), and it came to 8.4 lbs. Most of that weight is from the board pieces--they are pretty sturdy, and there's a lot of them.

Because of this extra weight, the box itself has to be sturdy. Rather than the single or double layer of thin card that comprises most of GW's boxes, this box is made of sterner stuff. It's a much thicker card that measures fully 1/16" thick. 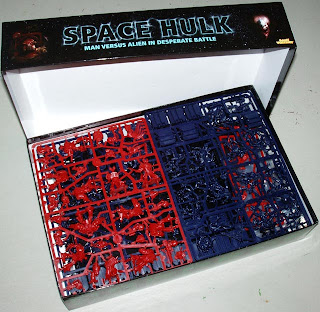 Chopping open the shrink wrap, you get a big whiff of that new box/shrink wrap smell, and get to see the goodies inside. The miniatures look awesome--lots of detail, and easily the match of if not superior to most of the plastic kits out there. 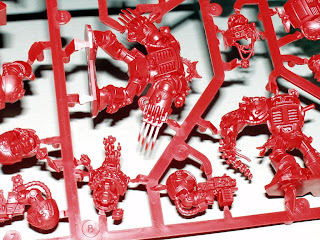 Taking out all the miniatures sprues, there are the thick card sprues of all the floor pieces. They are wrapped in their own plastic wrap. From the picture, you can see that the miniatures look to have damaged it a bit--but it just damaged the packaging, not the floor pieces themselves. The floor pieces/counters are all packaged painted side in to protect them--all the of the cool stuff is facing inward, which was a smart idea. 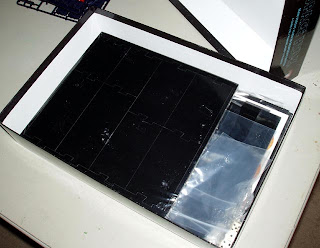 In addition to the 5 dice in small ziploc bag, you get four more ziplocs to store your counters in--another nice touch. 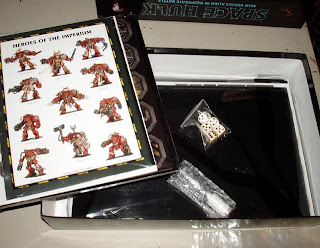 The board pieces themselves all look grim and dark--which adds to the mood of the spooky Space Hulk they are supposed to represent. The old tiles were more "cartoony" in nature, and looked very well-lit in comparison. The new ones are a big improvement. 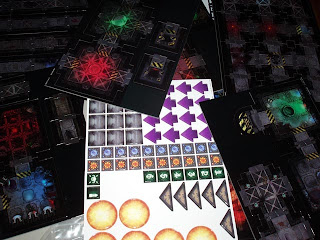 Are the new tiles and the old ones compatible? The short answer is yes. The pieces will fit together perfectly. The old tiles are 1/16" thick, while the new ones are a heftier 1/8" thick, but you can use them together just fine, with perhaps only an aesthetic loss.

Some old tiles together with new ones
The old doors were perfectly serviceable--in fact, it was cool to have a stand-up card model representing them. But the new ones totally blow them away. They're bigger, beefier, and awesomer. 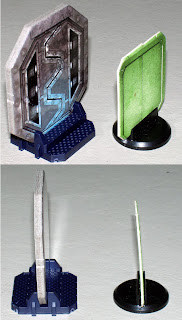 New Doors vs. Old Doors = No Contest
I haven't had time yet to delve into the rulebook and mission book in any detail, but they have the look and feel of color comic books--that is, their covers are made of the same paper as their interiors (unlike, say a 40k Codex). The rulebook is 23 pages, the mission book 47.

It was almost a shame to punch out the floor pieces from their sprues--they just looked so nice and pristine. But here they are, laid out in their little piles. The card sprues themselves, made of that thick material, has to be good for something, so I can't bring myself to just chuck them in the trash. Perhaps I'll think of some use for them. 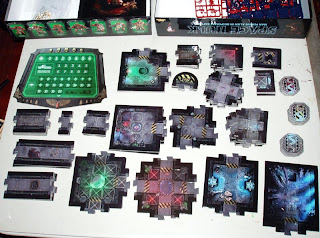 Finally, here's the various counters piled up--same stock as the board pieces, so they are pretty sturdy. 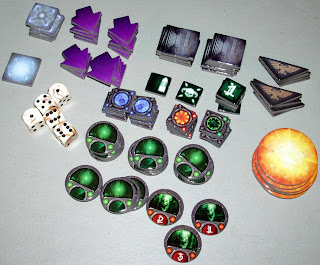 Well, my first impression of the game is that it's pretty awesome, and I'm eager to try it out. Since it's a self-contained game, I'll be taking care of this thing and keeping it all together to keep it intact. I know it'll be a while before I can paint up all the minis, but fortunately I have enough terminators and genestealers lying around to proxy when I get around to playing the game. Which I hope will be soon.
2 comments: