The limited-release of Space Hulk happened way back in 2009, and it took me a while to paint all of the miniatures for it, and even longer to play some games, and now, four years after its release, I have a battle report for it.

Genestealers: The Genestealer player begins the mission with two blips, and receives two reinforcement blips per turn. Blips may enter play at any entry area.

VICTORY
Space Marines: The Space Marine player wins by firing the flamer at any square in the Launch Control Room. When this happens the game ends and the Space Marines win immediately.

Genestealers: The Genestealer player wins the moment he kills the Space Marine armed with the heavy flamer, or if the flamer runs out of ammunition before firing into the Launch Control Room. 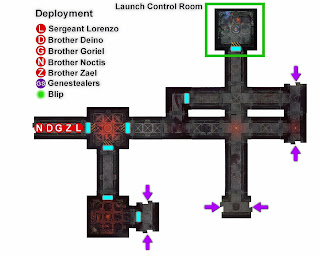 Read more after the jump...
3 comments:

For my second AAR for Command: Modern Air/Naval Operations, I decided to tackle the scenario Operation Lightning Strike, a nightmare scenario for the US.
From the scenario description:
There is nothing more frightening to U.S. military planners than nuclear weapons falling into the wrong hands. Unfortunately the most likely places this could happen also present significant political and military challenges. That being so the US must be agile and decisive when using its military power to prevent what could be a horrifying opening to a Third World War.
In mid 2014 a Pakistani Army Brigadier with extremist ties has managed to convince his command to seize a Pakistani nuclear weapons site demanding that all US forces leave the region and Kashmiri territories be returned to their rightful owners or “God’s fury” will be unleashed upon Indian and US forces in the region. The United States cannot stand for this and must act. Due to current commitments the US does have significant assets in the region however they must be used well to succeed as Pakistan is a significant military power and an ally.
Good Luck!
Read more after the jump...
1 comment: