The Eldar, having succeeded in all but destroying the orbital defenses of Arcadia Prime, began its invasion in earnest, landing forces in the Arcadian province of Cyclades.
Note: This battle marks the first use of Warhammer 40k 3rd edition.


Two Task forces from the Arcadian Navy were sent to investigate the region of the Battle of the Outer Rim--their mission was to search for and destroy any Eldar Raiders that they came across. Near the fifth Lagrange point of the the planet Arcadia Septimus, the Imperial ships encountered an Eldar attack force. Both forces engaged, while billions of kilometers away the Arcadia Prime Starbase was coming under attack. 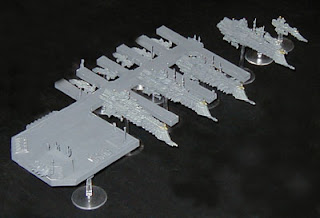 The Eldar Craftworld Yriel-Dyann launched its surprise attack on the Arcadia Prime Starbase. The Eldar plan was to attack the Starbase and destroy as many ships as possible before the Imperial forces could respond. Doing so would leave the planet vulnerable to invasion.

This was the second battle report I did, focusing on the early stages of the War for Arcadia Campaign. The scenario is based on a raid by an Eldar assault force attacked a communications station on Arcadia Prime, as an opening move for their main attack.

Battle Report: The Battle of the Outer Rim

The Eldar Craftworld Yriel-Dyann was preparing its massive assault upon the military forces of the Imperial controlled planet of Arcadia Prime. The first phase in their plan was a massive surprise attack on the Arcadian fleet and their Starbase at Arcadia Prime. The craftworld had enlisted the aid of an Eldar Pirate Fleet to carry out the operation. As the fleet began amassing for the attack, Captain Kier of the Eldar vessel Neien and his squadron were inadvertantly discovered by the Arcadian Navy Task Force 33, a small force on routine patrol. Realizing that the attack on Arcadia Prime would be jeopardized by his discovery, he directed his forces to wipe out the Arcadian ships before they could alert the rest of their fleet.

The following is the set of campaign rules that I wrote/modified for use within my gaming group. Alas, as many campaigns do, mine did not last long--as it is always hard to get the various people needed to fight the necessary battles in a reasonable time frame. For the time when it occurred, however, here are the rules as they stood:

The War for Arcadia finds a new home

So it looks like this will be the new home of The War for Arcadia. Originally I had my own website, then I changed the format to modernize it a bit, and now I think I need another change. Most of the updates to The War for Arcadia were the battle reports, which were, after all, its reason for being. When I changed the format of the website, I had intended on several related pages, including a gallery of my miniatures, some gaming and terrain-making articles, etc. As real life and other projects caused long gaps between battle reports, I got various posts to my message board, etc., asking if the site was still alive, etc.

With a blog, however, I can update it more often with news on what I'm working on, without strict updates to the website. The content will slowly be migrating over time, and hopefully I will be able to provide more updates than have been usual with the old format. Stay tuned.