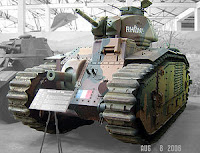 Warhammer 40,000 miniatures are described as "28mm scale". That translates into roughly 1/56 or 1/57 scale, depending on how you do the math. We all know that this is a joke--the miniatures themselves are not "true-scale".

For example, here is an Imperial Guardsmen, next to a real human being. The model of the Guardsman is wildly out of proportion. It looks good on the table, and you don't really notice the difference when holding it in your hand. But in comparison to the real thing...wow. 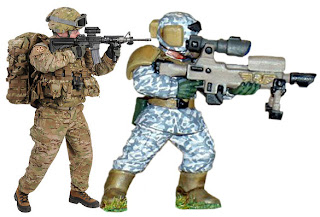 Not only is the miniature bulkier, it suffers from a form of gigantism--compare the size of the hands and the heads.  The lasgun is also ridiculous--the scope of the lasgun is as big as the receiver and barrel of the soldier's M4.

Here is the same image, but with the miniature shrunk to 70% of his width. 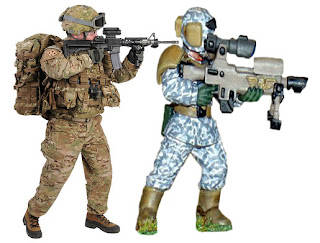 Compressed, the miniature is looking more to scale. However, the hands still look way out of proportion, the boots look like ski boots, and the lasgun is still insanely huge.

What about the height of the model itself?  From foot to top of the helmet, the miniature measures 30mm.  Assuming 1/56 scale, he stands about 1.7m tall.  Considering that his knee is bent somewhat, that seems reasonable.  His lasgun is 25mm long, which translates to 1.4m.   Considering that an M16 rifle is about 1.0m long, and even a Barrett M82 is 1.2m, the lasgun is a big gun.

Another comparison:  the "heavy stubber" that comes with the Leman Russ kit is 40mm long, which at 1/56 scale translates to 2.24m.  The real life counterpart, the M2 Browning, measures at 1.656m long. Well, I guess in the 40k Universe they like big guns. 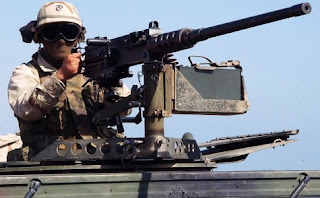 Despite this craziness in scale, the Cadian models are still my favorite Imperial Guard models.  But they pose problems when I want to scratchbuild a vehicle and have it look the right scale for them.

So I wanted to scratchbuild a tank.  A real one.  But at what scale?  I know that the miniatures themselves are supposed to be 1/56 scale...but it's clear by the comparison above that it's not really true.

The original Leman Russ Battle Tank model kit was a modified version of the Char B1 Bis, a French tank fielded in the early days of World War II.  (I wish I had the original source for this--but I do remember reading that in the early days when GW was a much smaller company, they couldn't afford to make their own plastic model kits from scratch, so they modified an existing one) 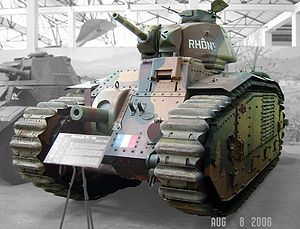 The tank bears a clear resemblance to the Leman Russ.  The current Leman Russ also has a small turret--it looks like it would be cramped for a single crewman--and it has been fitted with a ridiculously large battlecannon.  It is difficult to imagine that the battlecannon could be fired without the recoil squashing anyone in the turret.  Loading it in that cramped space with rounds that must weight several hundred pounds must not be easy either.  But the Leman Russ is considerably larger than the Char B1 Bis.  But how much larger?  If only we had specifications of the dimensions of a Leman Russ.  Then we could measure the actual model, and determine the scale... 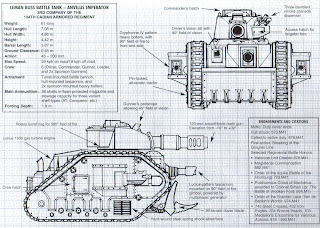 
I took some measurements of one of my Leman Russes, and got the following values:
Hull Length:  114mm (not including gun barrels and/or dozer blade)
Hull Width:  78mm (not including sponsons)
Height:  75mm  (Note: depending on what hatch you choose, this measurement is less straightforward then the others)

These measurements give me a range of scales from 1/59 to 1/62.  Not exactly the same, but well within the margins of error.

As an aside I will note that the battlecannon is described as a "120mm smoothbore main gun," which is enough to make you laugh out loud. (I suppose since the M1A1 Abrams and the Leopard 2's main guns are 120mm smoothbores, it's fashionable to give the Leman Russ have the same type of gun)   On the model, the bore diameter of the Leman Russ' battlecannon is 7mm, which scales up to 343mm, which is comparable to a World War I Battleship's main battery!  Now that's impressive.  A 120mm diameter barrel, should, to scale, measure about 2.5mm in diameter. (for comparison, the flash suppressor on a lasgun measures 2mm in diameter)  I guess a realistically scaled gun barrel didn't have the girth to compensate for the shortcomings of the original Leman Russ model kit designer.

So I decided on making an scratchbuilt M1 Abrams at 1/57 scale.  I looked online for some schematics on the M1, like this: 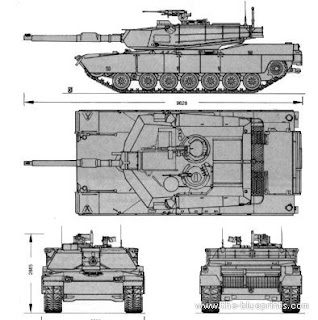 and I proceeded to take tons of measurements.  I then broke it down into manageable geometric shapes.  Next I had to do some trigonometry to calculate the actual dimensions of various components, for example, the sloped front sections of the turret, which are not shown face on.

I scaled it all down to 1/57 scale, and produced plans for a posterboard model. 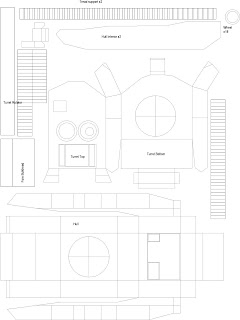 I could transfer these plans to posterboard, cut them out, and then fold/bend them to make the proper shapes.  Some glue and tape later, and I would have myself a tank!

Unfortunately I did not take any pictures of the work in progress, but here's the result:

In the next part of this post I'll describe how this turned out scale-wise by comparing it to some 40k models.

What a brilliant piece of work! Genius! I've seen the char 1 at Bovington and it's really quite small. Interesting history on the Leman Russ. I'm to thinking that the original Mk 4 is closer to the design of a Leman Russ though. The Male variant had side guns etc. Interestingly the 'almond' shape of early tanks was all about getting over trenches. Hence why most WW2 tanks are not that Russ almond shape. This leads to the weirdly high, open, vulnerable tracks, a poor design.

In the old FW Imperial Armour books (I haven't bought one since IA Apocalypse) the 'technical spec' pages for the vehicles are usually stamped with a number which includes the code "DVLA"...an evident in-joke for those of us on this side of the Atlantic, as the DVLA is the Drivers and Vehicle Licensing Authority, and is therefore synonymous with all thing vehicular in the UK!

This is easily the best written piece I've seen on scale comparisons with the game. Not only did it cover a variety of examples and measurements, but it was understandable to someone (me) for whom math is almost as arcane as politics. Can't wait to see more.

I know this is an old post. I also have 40k scale creep issues. There are lots of examples of people converting marines into true scale proportions.
This is an excellent article. I am very pleased to read it.